Here are 8 of the most common snakes you may encounter in Tennessee including identification tips, threats, and treatment recommendations:

They’re usually found in protected areas such as woods, overgrown vegetation, cluttered areas, etc. and most active during summer months in the morning hours. If you encounter a kingsnake, use caution; they are non-venomous but strong constrictors and may bite if handled.

Keep eastern kingsnakes away from your home by limiting their food sources – other snakes, lizards, rodents, and birds, removing clutter and debris, storing wood away from your home’s exterior, use a snake repellent product, or contact a pest control company specializing in snake control. Rat snakes are large, 3-6+ feet long, and black and yellow with stripes, or gray with darker patches.

You can expect to find them in wooded areas, overgrown vegetation, swamps, abandoned or vacant buildings. Though they’re non-venomous, they may bite if handled or threatened and will climb for food.

They’re active during day or night hours and often found in suburban areas under debris or boards – anywhere that provides cover for them – and around water, grassy areas, woods, and marshes. Garter snakes are common throughout the Southeast and most of the U.S. Like other non-venomous snakes, they pose no real threat unless bothered. Black racers are common through the eastern U.S. and most often seen near forest edges, fields, or wetland outskirts during the day in warmer months. They’re non-venomous and usually timid, fleeing when threatened.

To keep them away from your home, reduce food sources – insects, lizards, snakes, birds, rodents, and amphibians – and apply snake repellent products. Brown snakes are small, 6-13 inches long, and usually brown but may be yellowish, reddish, or grayish-brown with darker spots on the back.

You’ll find them in residential areas, wooded areas, near wetlands, and in urban areas under wood, leaves, and debris, or any other area with adequate ground cover. Brown snakes are the most common snake found in urban areas. They’re most active during evening or night hours, occasionally seen crossing roads. Brown snakes are non-venomous and pose no serious threat although may bite if threatened.

While they’re not dangerous, you may not want to find one hiding out around your home. Prevent this by removing clutter and debris from your yard and consider using a product that brown snakes find repellent. Copperheads are large snakes, usually 2-4 feet long, with a heavy body and a triangular shaped head. They are tan to brown in color with hourglass shaped darker bands running across the body; juvenile copperheads have a distinct yellow tail tip.

You may encounter a copperhead snake in suburban areas or in semi-protected areas like woods or swamps. They’re common throughout central and eastern U.S. with the exception of some areas in south Georgia and all of Florida. Copperheads are venomous and dangerous and may bite if threatened. Use caution when outside in the summer, especially at night.

Deter copperhead snakes from hanging out around your house by reducing potential food sources – mice, small birds, lizards, small snakes, amphibians and insects. If you see a copperhead, contact a wildlife control company to safely remove it. Cottonmouths, also called water moccasins, are large snakes – 2-4 feet in length – with a very heavy body and a distinctly triangular head. Their color varies from solid brown or brown or yellow with dark crossbands with a white mouse (inside); juveniles have a yellow tail tip. When threatened, cottonmouths display with the head in the middle of their coiled body and mouth wide open.

As the name “water moccasin” suggests, cottonmouth snakes prefer to habitate near freshwater, swamps, river floodplains, and heavily vegetated wetlands. While they’re most common throughout coastal regions, cottonmouths are prevalent across the southeast U.S. They are active day and night but more likely to be seen when foraging for food at night in warmer months. Avoid cottonmouths if you come in contact with one, they are venomous and may bite if threatened. Use caution around fresh water habitats in the summer.

If your home is located near a body of freshwater, consider using snake repellent products around your home to deter cottonmouths. 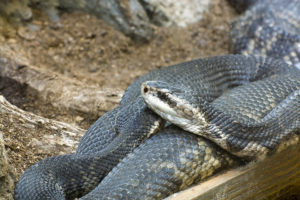 Coral snakes are brightly colored – red, yellow and black – and usually 1.5 to 2.5 feet long. When threatened, they lift their tail and the tip curls over.

Coral snakes are most common in Florida but are also throughout much of the southern coastal plain, found around pine and scrub sandhill habitats, hardwood forests and pine flatwoods that flood, and in suburban areas. They’re rarely seen, spending the majority of their time underground. Most sightings occur in the Spring or Fall. Avoid handling a coral snake, they are venomous and may bite if threatened. Common Nuisance Birds and How to Control Them

DIY Tips for Keeping Birds Away

How Much Does Wildlife Control Cost?

Keeping the Birds Away Naturally

Have a Question? Ask us here.
Fill out my online form.